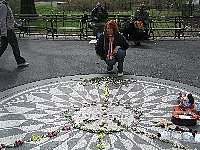 December 8, 1980. I remember where I was. Senior in high school. I had never been to New York City but the world changed in that instant. I remember I had a British pen pal and we wrote letters, he was a Beatles fan; we were devestated, of course. I finally visited NYC for the first time in April, 2007 and had to stand at the Imagine memorial. Every year I remember.

It's easy if you try

No hell below us

Above us only sky

It isn't hard to do

Nothing to kill or die for

And no religion too

You may say I'm a dreamer

But I'm not the only one

I hope someday you'll join us

And the world will be as one

I wonder if you can

No need for greed or hunger

A brotherhood of man

Sharing all the world...

You may say I'm a dreamer

But I'm not the only one

I hope someday you'll join us

And the world will live as one