The Foshay is now new and modern. But on Friday, August 30, 1929, the skies of downtown Minneapolis lit up w 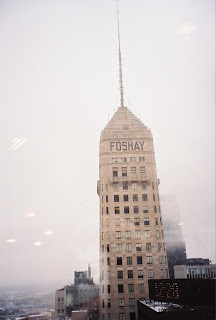 ith skyrockets. Earlier, John Phillip Sousa and his 75 piece band gave the first of several concerts for the cities citizens. The next day, James Good, Herbert Hoover's Secretary of War, would deliver an address dedicating the object of all this civic fuss. The Minneapolis Journal was 'downright poetic' about Foshay's monument:

Like veritable temples in business, these modern towers rise high in the air and house the thousands. Safe and luxurious elevators lift one from floor to floor more dexterously than Jacob's ladder, with angels ascending and descending upon it. Modern towers unite people rather than divide them. From their heights mightly searchlights guide lone pilots on their way to ports and havens safe. (Mpls Journal, Aug 30, 1929)

I wasn't thinking of this statement when the doorman escorted my friend and I up the elevator to the 27th floor bar, Prohibition, part of the new Foshay's makeover into a W hotel. Ralph Burnet, you're making quite an impression on this little city that could. (I used to sell real estate for Burnet Realty in another life).

The photo on the right is the entrance how I remembered it. Clouds on the ceiling 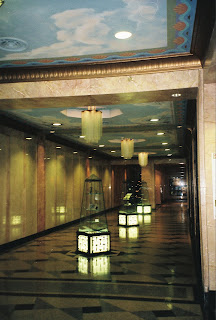 , the lit chamber boxes with historical tidbits. I walked through the building on my lunch break or after the bus ride. So last week, Thursday to be exact, I held my breath in anticipation of what I would find as I walked through the doors. Bright pink neon, dark walls, luxurious leather couches along the wall, the modern bar of Manny's steakhouse and restaurant. Foshay, are you all grown up now? Do you like your new makeover? Your lobby is now the hotel front desk and public space. As we wandered through the bar and the lobby, I wondered what will the future be for my favorite building in Minneapolis? The bartender poured my gin and tonic so strong that that must be a good sign wanting me to come back! Earlier I had met some co-workers at Keys, our usual hangout, on the sidewalk. We talked of the upcoming Republican convention, how strangers will take over the twin cities and we will be cringing, waiting for it all to be over. But we can have some fun, too. Give directions to tourists to the bad parts of town. Even our elected officials don't realize that St. Paul is the headquarters, not Minneapolis. They forget we are the TWIN cities. I read about our cities in the New York Times on Sunday. The travel writer didn't even mention west 7th street restaurants, right next to the Excel Energy Center where it all will be happening. Maybe they're not hip enough, or rich enough for them. Remember, this is the midwest.

I thought of Wilbur Foshay going broke. His empire crumbled two months after its greatest monument was dedicated. Mr. Foshay was tried in federal court with mail and securites fraud. Foshay was convicted and sentenced to 15 years at Leavenworth. President Roosevelt pardoned him after three years. One of the jurors for this trial, Mrs. Genevieve Clark, was prosecuted for perjury and convicted. She had perjured herself in defense of her former boss. The day before she was to have begun her prison term, she, her husband and her two children were found dead in the family car out at Pryor Lake. They hacked a hole through the side of the car and had run in a rubber hose from the exhaust pipe.


The observation deck is still open to the public, on the 30th floor, now dwarfed by skyscrapers, but I can imagine what it was like when the Foshay was the highest building on the horizon. Look down into history - there are many stories to be told poking around in the life of Wilbur Foshay, the history of the legal system, farmers driven off their land, the Gateway district, the Great Depression, and the Floyd B. Olson movement of the '30's. Olson was a progressive echoing the same sentiments we are dealing with now. Look up the 1934 workers strikes; there was bloodshed and the calling of the National Guard. Olson received the 1934 Senate endorsement, but died a few months later. A hero mourned by 200,000 Minnesotans.

Remember the history, those of you building empires. The Foshay may be around longer than you will.