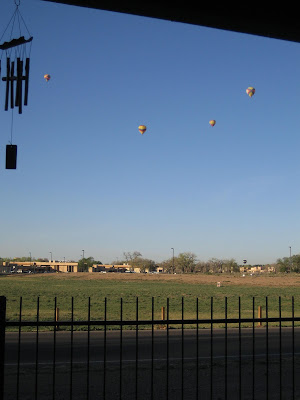 Today I wake up to four hot air balloons rising, which I can see from my patio in my new apartment in Albuquerque. A good sign, since I am hoping to go ballooning Sunday morning. I treasure the invitation from my new friends, Randy and Diana, to be part of the adventure, and I am bringing along my new romantic interest, Tim, who has also never been ballooning. I took a leap of courage in my journey to come here without knowing what to expect and I am pleasantly surprised, or more appropriately, blown over, by the intensity of what is happening in my life. I have met a wonderful man, and I had to come all the way to Albuquerque to meet a fellow Minnesotan. We’ve known each other only a few days and it seems like weeks, or months, or a lifetime.

As I watch the balloons rise, I think of the role balloons have played in history. I read the book “Jules Verne: The Man Who Invented Tomorrow” by Peggy Teeters. The book practically fell off the shelf to prompt me to read it at the Albuquerque library last week and reminds me that I chose my name for my writing life and for curiosity and adventure. (Most of you know my birth name was Julie, but I legally changed it to Jules many years ago).

The legendary author Jules Verne writes a fictional account about balloon explorers on the “Victoria,” a passenger balloon scheduled to go across Africa from east to west following the trade winds. It’s three passengers were Dr. Samuel Ferguson, an English explorer, Joe Wilson, a faithful servant, and Dick Kennedy, a courageous Scotsman. They maneuvered the “Victoria” over the jungles of Africa where the local inhabitants thought she was a foreign god. She was moored on the top of a breadfruit tree so that she would be safe from attack by some of the people below. On another occasion, her trail rope becomes entangled in the tusks of an elephant that begins to race wildly over the terrain with the balloon in tow. Jules Verne couldn’t resist putting Victoria and her crew in the midst of a blinding rainstorm and had Dr. Ferguson battle to make her rise high above the clouds away from the flashes of lightning. At the end of the story, the three men finish the journey without the basket, clinging to the net of the sinking balloon.

Verne’s novel opens with a brief factual account of African exploration up to that time – this is 1862 – and the reader is promised the revealing of the source of the Nile, Lake Victoria. This is the manuscript for Jules Verne’s “Five Weeks in a Balloon” which was published in January 1863 (after over fifteen rejections) and was an immediate best-seller with adults and children and provided enough income for Jules to live off his writing and give up his jobs that allowed for no creativity. In fiction, the Victoria has a successful flight in spite of its heart-thumping moments. On the other hand, in real life, there was an international race going on to discover the source of the Nile, the longest river in the world. Africa was unknown to the Europeans of the time and Jules’ idea of having his fictional explorers find the source of the Nile granted him success.

The French explorer/photographer Felix Tournachono, better known in Paris as Nadar, had a giant balloon, named appropriately, “The Giant” and equipped it with double-decker bunks, a kitchen, and a darkroom. Nadar didn’t really believe that the balloon could succeed as a means of transportation and told Jules the only reason he was building the “Giant” was for the money and the publicity it would bring him so that he could construct a primitive kind of helicopter. Jules, however, kept on writing. Nader’s
“Giant” crashed in Hanover, Germany, nearly killing the adventurer and his wife.

Hot air balloons also helped the French war effort in the 1870 with Napoleon’s downfall and victory over the Germans. Over sixty balloons left the capital during the siege, with most of them landing in friendly territory carrying pigeons, dogs and letters. One balloon flew 600 miles to Konigsberg, Norway, while another got up to a speed of 95 mph. A German balloon and a French balloon (piloted by the Frenchman Nadar) had even engaged in an air battle – the first in world history. Nadar had shot the German balloon down.

Jules Verne would go on to write “Around the World in Eighty Days,” “Twenty Thousand Leagues Under the Sea,” and “Journey to the Center of the Earth.” Jules Verne passed away at the age of 77 on March 24, 1905. Over 5,000 people came to his funeral, including schoolchildren, soldiers, politicians, clergy, scientists and writers. Jules’ son Michel erected a monument on his gravesite two years later at the Le Madeleine Cemetery in France. I will have to put Jules Verne’s gravesite on my list of cemetery visits for my own future travels. Jules Verne is an inspiration to me as a writer. New Mexico balloons are inspiring, floating pieces of the imagination that can take me almost anywhere.

I am not going to be as adventurous as the “Victoria,” however! Randy and Diana’s balloon is named “Sky Candy,” very appropriate for bright skies and fun travels! We will lift off from a parking lot at 6:30 in the morning, float over the suburbs and the valleys and land a couple of hours later to a welcoming tailgate party. I am a virgin balloonist, and now, by lifting off the New Mexican soil into the one-of-a-kind blue sky, I am finding out what courage and adventure feels like. How rewarding it is to feel at home with new friends and new love, in a new landscape. I want to share my experiences with all my friends scattered in Minnesota and elsewhere. My past is grounded, my future is open, my present is rising with the balloons.