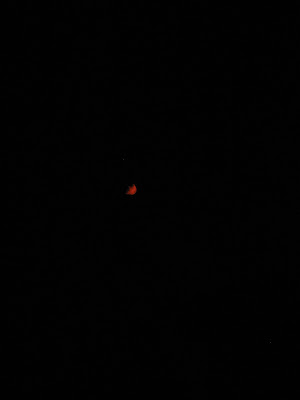 I came to find light. From the northern land of clouds and rain, I followed my tug of intuition that set me off on this journey to New Mexico. A pilgrimage, or a sabbatical; I came to find clarity in a new landscape where the sky is a different shade of blue and light reflects more intensely. I have experienced more sun in the last three months than I would have in several Minnesota summers.

The last couple of weeks Albuquerque has b 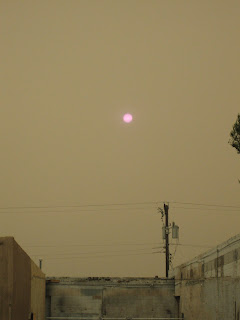 een engulfed at night by smoke from the Arizona wildfires a couple of hundred miles away. Breathing is no longer taken for granted. The moon turned red.

It’s clearing out now and the days remain clear, the nights are full of stars. Riding back from Santa Fe in my new friend’s yellow convertible, I breathe -- I notice the big dipper hanging above us. I am finding my own sense of clarity within the wind, the dust and the clearing smoke.

I arrived here in March, just after the Spring Equinox, in the middle of one of the windiest windy seasons on record. I found out I am allergic to dust, and realized after a few weeks that I miss water, and rain, and endless green. It took me a couple of weeks to acclimate to the altitude. Minneapolis elevation is at 841 feet. Albuquerque is 5,000 feet. I came in on a whirlwind of hope , only knowing of five people who lived in the state, and only knowing one fairly well, my writing coach. I stirred up quite a bit of feelings being introduced to a new romantic interest that started very quick and intensely, and is now evolving into something I’m not as sure of. There are patterns and circles that flow and interconnect, kind of like fractals.

What did I expect when I came here? What type of journey did I think I would find? I look back to the reasons I wanted to move here and the fears I had on what was holding me back. The fear of how I would stay the same, in the same patterns if I didn’t make it happen. The fear of getting stuck. I wanted to move if I but only if I had the right conditions: if I could keep my friends, if I could make new ones, if I could grow and have new experiences. I wanted to move to save money, to have new places to explore on weekends, to jump-start my writing, and most of all, to challenge myself. I worked through all of my excuses with help from my Minneapolis community and a lot of exercises and workshops. I made the decision and made the move and set off on an exciting new adventure. Of course, things always take longer and cost more money than planned.

What I found was unexpected. Hot air balloons. The windy season. Romance. Volcanoes. Alien beer. Petroglyphs. Inner turmoil. Light. I chose to become an immigrant and to be uprooted. I have the independent, wandering spirit from my grandfather, who came to Minnesota from Sweden 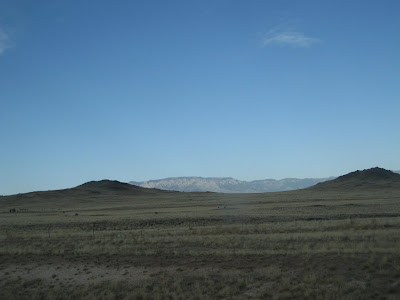 in 1901 at age 18, the only one in his family to leave the homeland. He came for new opportunities, and to get away from the Swedish-sponsored Lutheran church. He had sponsors and help for a new start and a new life. I am a native Minnesotan and although I have traveled quite a bit, I had always lived in the Twin Cities metro area. I wanted New Mexico as my new home and I have found a few ‘sponsors’ to help me. I also knew that whatever struggles I would have to deal with, the landscape would hold me. The landscape is what drew me here and what I continue to respect and learn from. The gorgeous Sandia Mountains fill my daily life. The volcanoes have their secret beauty. It is a terrible type of beauty where I am not in control. I have to listen to the voice of the land.

I am reading “Death Comes for the Archbishop” by Willa Cather, which was a gift to me from Tim’s parents. I had never read the classic and although I never thought much of the Catholic church and what they did to the Native Americans, Cather’s fictional rendering of Father Jean Marie Latour coming from France to the vast unexplored territory of New Mexico in the 1850’s portrays him as sympathetic and respectful. Latour learns from the unforgiving landscape and explores his own loneliness. “That country will drink up his youth and strength as it does the rain." Ah, yes, how appropriate. I am not a tourist anymore, I am here for the long haul. The landscape is testing my strength.

To give another example, here is an excerpt about the Bishop Latour on his way to visit his Native American friend Eusabio – “the ride back to Santa Fe was something under four hundred miles. The weather alternated between blinding sand-storms and brilliant sunlight. The sky was as full of motion and change as the desert beneath it was monotonous and still, -- and there was so much sky, more than at sea, more than anywhere else in the world. The plain was there, under one’s feet, but what one saw when one looked about was that brilliant blue world of stinging air and moving cloud. Even the mountains were mere ant-hills under it. Elsewhere the sky is the roof of the world; but here the earth was the floor of the sky.”

Jean-Baptiste Lamy was the real-life French roman Catholic clergyman and the first Archbishop of Santa Fe that Cather’s novel is based on. His bronze statue is in front of the St. Francis Cathedral and he is buried under the sanctuary floor of the Basilica.

Personally, the land is my spiritual haven. I have moved from the 44th latitude parallel to the 35th latitude parallel. Albuquerque has 14.5 hours of daylight on the summer solstice, whereas Minneapolis has about 15. I lost a half hour of daylight but gained more sun. The Swedish midsummer is celebrated around the time of the summer solstice, with dancing around maypoles, bonfires and wearing crowns of wildflowers. Midsummer was thought to be one of the times of the year when magic was strongest and it was considered a good night to perform rituals to look into the future.

My will is sometimes tested with the quirky culture of Albuquerque (or Albuquirky as some call it). Getting my New Mexico driver’s license was easy enough, however I had to go through a week’s worth of paperwork and several trips with emissions and VIN doctors and MVP bureaucrats to get my New Mexico license plate. The political climate here can be depressing with a new Republican governor, the public schools are among the lowest rated in the country and the daily news reports endless drunk drivers with no treatment or no plans to get them off the road before they kill someone. Drug trafficking is in the schools and there are abandoned pet notices everywhere. In spite of all this, I am encouraged by the literary community here with a wonderful collaboration of poets and musicians. I have found a Monday evening open mic that is interesting and inspiring, and there are several weekly workshops and readings that give me options of ways to be connected and involved in the community. There are several independent, small presses here and a good University system. Every city has it’s down side, but Albuquerque, Santa Fe and Taos have some of the best artists in the country. I am here to take advantage and learn from that. I am already making the 50 minute drive to Santa Fe a weekend habit (or taking the Rail Runner), and Old Town Plaza is just a few minutes away. What I used to dream about is right outside my turquoise door. Last week I was writing in the O’Keeffe Museum for an evening workshop. I already have had a stream of visitors to my guest bedroom. My taste buds are happy too - who would have thought this Swedish girl would become addicted to green chile! I have learned to make it at home and put it on everything, including my new favorite, green chile mac and cheese.

I am writing – that is the main thing – new poems, new collaborations. 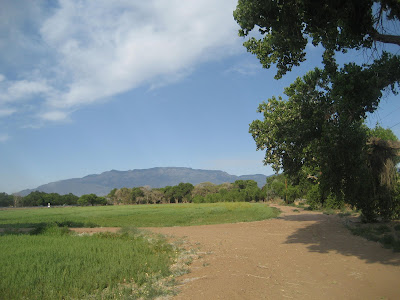 I continue to meet new friends and the Duke City is home for me. I felt that when I visited Minneapolis for a reading a few weeks ago and flew home. Albuquerque is home. When will I feel like a local? I feel it now, with my apartment, seeing friends, reading my work in front of others, going out to eat or on my daily walks with the gorgeous mountains. I have a routine and I’m settling in. I see the occasional road runner or the cute little lizards scampering across the patio. I mostly feel it learning what the land has to tell me. I am living my authentic self, or trying to. Here I am on the sage-brush desert edge of the world where I can breathe.

Hi Jules,
Cather was not informed about Padre Antonio José Martinez, the liberal, enlightened priest of Taos. She slandered him in "Death Comes." for a revelatory view of him, see E.A.Mares's chapter on Padre Martinez in the book "New Mexican Lives," ed. Richard Etulain, and in Mares's play about the Padre, "I Returned and Saw Under the Sun." Tony Mares is also one of the senior honored poets of 'Burque. Thought you'd like to hear another side of that sotry, of yoour new home. Welcome--I too have Swedish ancestors from Minnesota.--Steve Fox, sfox@nets.com