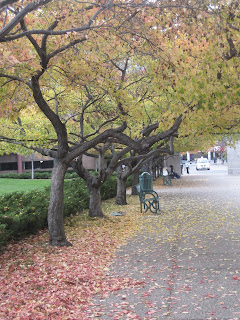 I took this photo on Friday - leaves, colors, crisp weather, warm days....I love living here where there is autumn!
Posted by jules at 4:25 PM 1 comment:

Remember the other woman whose last name also begins with "P"? In the what's-her-name-I-refuse-to-acknowledge political media hype, remember that the Speaker of the House is third in line to the Presidency. So, if the current VP candidate managed to get elected from American stupidity had that heartbeat away experience to become President and then something happened to her, there would be another woman waiting in the wings: Nancy Pelosi. (Another good thought, she is there waiting, for the Democrats too).

I am not particapting in the audience for TV and radio political media foolishness. But I am reading the New York Times, and Maureen Dowd had an insightful and funny op-ed piece on speech patterns of political candidates. Since when does being 'common' or 'middle class' mean that you talk in "Frontier Baroque"? (Dowd)

Then she uttered yet another sentence that defies diagramming: "It is from Alaska that we send those out to make sure that an eye is being kept on this very powerful nation, Russia, because they are right there." (Dowd)

Dowd summarized her thoughts with her best insight - True mavericks don't brand themselves (as mavericks).

I started thinking about my high school experience - the "brains" were sometimes picked on by the "jocks," in a kind of jealous way. The jocks had the veneer of popularity with their looks overcoming any grammatical and intellectual setbacks. We had debates in high school too - and a good debater could take either side and make a good closing argument. The art of debating is lost in television. Now it's looks, personality and one or two soundbyte lines. My personal high school experience didn't prepare me very well for diagramming sentences or identifying a dangling gerund or mangled preposition but I did come out of school a good speller and in the top 20% of my class. Maybe there should be a spelling bee debate - Obama/Biden would win hands down. Obama wrote both his books by himself, without a ghost writer, only the usual editor. What is it that America has against intellectuals by calling them "elite"? At my 20 year high school reunion, well...even by the 10th....the 'jocks' were looking old and the 'brains' or 'nerds' had the good jobs, the money and were suddenly popular with those who never paid them any attention. That is, if they bothered to show up at the reunion.

The Presidential Election reminds me more and more of a High School Homecoming King/Queen contest - but this time the brains must win over the jocks. There is more at stake than a football game.
Posted by jules at 8:19 AM No comments: