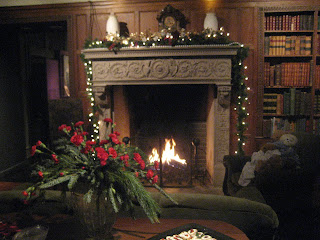 Sometimes the only place that feels like home is someone else's home.

December 17, 2009 - Icons for the Bereaved Poetry Reading at the Hennepin History Museum, 2303 - 3rd Avenue South, Minneapolis, MN. The photo at left shows a bit of the warm ambience I felt here reading with my poet friends. We shared our words on death, grief, loss - leading to hope. It was almost winter solstice, the time of the darkest night, when light will begin again to creep into our lives, to lengthen our days. Thanks to Jada Hanson, Executive Director, for letting us perform in this beautiful museum space.

When I went to the exhibit opening about a month earlier, I was so moved by the artifacts and the feelings I experienced I just had to share it with everyone. I thought of my friends that may have writings related to the exhibit theme and with a connection or two, I was on my way to curating the reading series. I wanted to bring poetry to those who may not have attended a reading. I wanted to bring the museum and this exhibit to writers, and to

help expand the museum publicity new faces. Cheryl Ullyot graciously provided the food and wine, and we were off.....releasing grief and sorrow out into the Universe and the dark winter night, where it was magically transformed into something larger than ourselves. The cycle of life and death continues. Several of us have mothers, uncles, friends who are hovering at death's door, or who have passed through. We let it be, it is, and we remember we are not alone.

The exhibit has some powerful photos and artificats of late 19th and early 20th Century rituals. Full mourning lasted a year, wearing black in public with modest crepe fabric, hats and veils for women. Another 9 months of black silks and velvets. Relatives were born at home and died at home. Photography was in vogue and familes wanted portraits of their deceased loved ones with the living, sometimes the only photo they would have of a mother and daughter, or father and son. Two photos in the exhibit stood out for me. One was a young deceased child sitting on a rocking chair in a white dress, holding a stuffed toy, in front of the fireplace. The other was the deceased mother dressed in black, standing behind her living baby; the mother's eyes were closed and her hands are clenched in fists, wrapped towards her child. I'm sure the family wanted this as a keepsake, probably the only photo of them together, but oh, what a moving, powerful, almost creepy tribute. 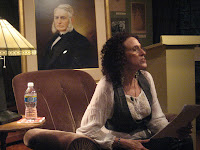 Anya Achtenberg read an excerpt from her novel - it seems like the man in the painting is listening in, waiting to announce his approval - whoever he is. (His name was listed, but I did not recognize it, that is a subject for further research). 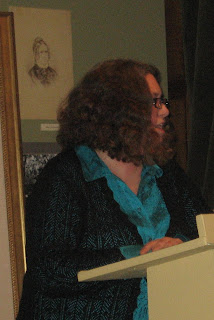 Kari Fisher shared a moving tribute of poetry and memoir, referencing W.S . Merwin's "For the Anniversary of My Death" (Every year without knowing it I have passed the day....) and Meridel LeSeuer into something I can only now recall as magnificent!

Our John Berryman experience (Berryman is referenced later...) was when we visited his gravesite a few years ago, where he is buried next to his mother in a Catholic cemetery in Mendota Heights, MN. See the separate blog entry on that.

Cindra Halm - your musings on your mother and Lake Superior, the sounds and rhythms you bring were enchanting - you bring us hope and light through the solstice!

Freya Manfred opened with one of my favorite Bill Holm poems on the Solstice (Bill passed away earlier this year). She shared her work from her sixth book of poems, "Swimming with a Hundred Year Old Snapping Turtle." Freya and I have a bond with our philosophy on reading - her father, the novelist Frederick Manfred was always reading, before or after dinner, or anytime he could grab a minute. "The best way to be a good writer is to read," he said. I agree. Bennington College, my alma mater, always told us, "read 100 books, write one."
One of the themes I see in Freya's work is water - how it represents a passage through time, and hope. Here is one of her poems from "My Only Home" part of the "Winter" series:

Down on the frozen lake,
I look for signs of life.
In the center of the bay
I find three round holes
drilled and abandoned by ice fishermen.
I lie on my stomach and peer
into one pale green cylinder,
hoping a fish will swim by.
I wait until the entire lake
tilts upright -- with me at the knothole --
but I see no fish, no mermaids, no stars,
just pure water rising toward me
from a meadow of green light:

like a memory of a dream
of a place I once
belonged.

Loren Niemi's theme was John Berryman - he read a poem that referenced something about meeting a girl in a bar, being stood up for lunch, and quoting Berryman. He shared one of his masterful stories about sitting in on a U of M class where Berryman could be in one of three states when he walked in: drunk, sober or hungover. Loren closed with a poem, and although I didn't write down the number of the dream song, I have included a John Berryman poem below, #11 - (from "77 Dream Songs") that I thought would be a good tribute. Loren's mother was dying when this reading was taking place, and she died on December 24th. Our t 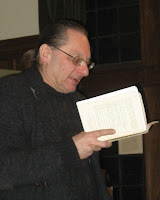 houghts and sympathies are with everyone who has had someone they love pass on to the other side.

His mother goes. The mother comes & goes.
Chen Lung's too came, and came and crampt & then
that dragoner's mother was gone.
It seem we don't have no good bed to lie on,
forever. While he drawing his first breath,
while skinning his knees,

while he was so beastly with love for Charlotte Coquet
he skated up & down in front of her house
wishing he could, sir, die,
while being bullied & he dreamt he could fly --
durring irregular verbs - them world-sought bodies
safe in the Arctic lay:

Strindberg rocked in his niche, the great Andree
by muscled Fraenkel under what's of the tent,
torn like them limbs, by bears
over fierce decades, harmless. Up in pairs
go we not, but we have a good bed.
I have said what I had to say. 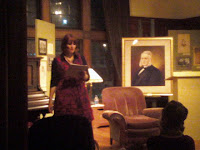 I shared poems on suicide and a monologue on Liam's shoes. They felt like a collection of eulogies, or notes on what is coming: cancer, unrequited love, waiting impatiently for resurrections. My uncle had died two days earlier. I find my solace in nature, it's healing presence, and in friendships. This reading was a tribute to acknowledge those who have passed before us, to release the grief out into the universe, into the darkness. I wonder if some of those gone were listening. I know those still here were. With friendships and shared writing and reading, shared poems and stories, we help each other heal, we bring forth the light that will last longer each day. 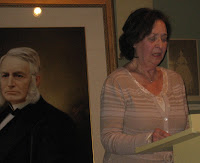 Roslye Ultan - your poems on the loss of your husband were deeply moving and I loved the progression they took through time as the years have passed.


I will end with a poem by Minnesota poet Bill Holm - a fitting tribute:

Let go of the dead now.
The rope in the water,
the cleat on the cliff,
do them no good anymore.
Let them fall, sink, go away,
become invisible as they tried
so hard to do in their own dying.
We needed to bother them
with what we called help.
We were the needy ones.
The dying do their own work with
tidiness, just the right speed,
sometimes even a little
satisfaction. So quiet down.
Let them go. Practice
your own song. Now.

Thanks to one and all - I will be focusing on a quarterly reading series. This was the beginning - Winter. Watch for something in Spring.